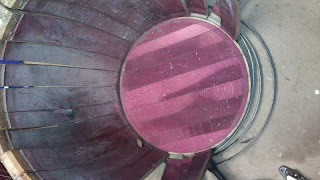 I've made a few neat things out of this wine barrel that I got for $35 off of Craig's List. So far, a few candle holders, a couple clocks, and a wine rack. Since I broke the barrel open I've had several ideas for what to do with the hoops. If I were to cut them up they'd make nice accents on the candle holders or wine racks. I might even find a way to use them to make Roman numerals on the clocks. At this time, I don't have an easy way to cut them up so I decided to use them whole. 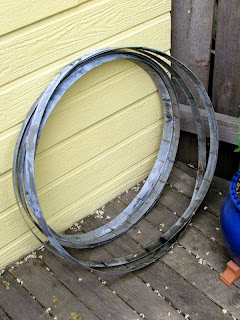 The hoops are oxidized and weathered and should make some wonderful yard art, I believe.  Perhaps placed between the jockeys and gnomes, but in front of the crudely painted, not-so-funny, plywood cut-out folk art.

In an earlier post I commented that my wine barrel anatomy was sub par. Not so anymore. Prepare to be amazed:

Since the two bilge hoops encompass the widest part of the barrel they were the outside of my globe. These were followed in succession by the quarter hoops and finally the head hoops. I measured the diameter of the bilge, quarter, and head hoops individually, multiplied it by (go team hold that line) 3.14159 to get the circumference, and followed that up with some wicked division (by 2 & by 4) to figure out where to drill the north and south pole holes in the bilge, quarter, and head hoops, to make the poles fall on exact opposite sides. I used some extra mounting bolts from my TV for the poles. Unfortunately, I didn't have any nuts that matched the thread so I had to run to Home Depot and spend about $2 for a dozen nuts. I place a nut between each pair of the bilge, quarter, and head hoops and tightened the whole business down with my drill.

To finish it up, I rotated the bilge, quarter, and head hoops to roughly space them equidistant apart, and then tossed it in the flower garden. 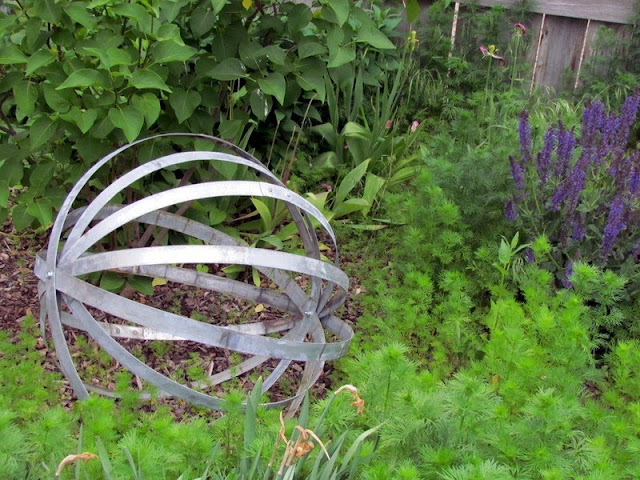 Posted by The Peaceful Axolotl at 8:07 PM